Donald Trump was bombarded with criticism on Tuesday for labeling late Secretary of State Colin Powell a ‘RINO’ who ‘made plenty of mistakes’ in a statement one day after Powell’s death of COVID-19 complications at age 84.

In an email full of mixed messages, Trump commented on the posthumous praise Powell has been receiving since Monday morning and said he hoped he’d get the same treatment ‘one day.’

‘Wonderful to see Colin Powell, who made big mistakes on Iraq and famously, so-called weapons of mass destruction, be treated in death so beautifully by the Fake News Media,’ Trump said in a statement through his Save America PAC.

‘Hope that happens to me someday. He was a classic RINO, if even that, always being the first to attack other Republicans. He made plenty of mistakes, but anyway, may he rest in peace!’

People across the political spectrum seized on the comment. Trump was accused of being ‘jealous’ of the posthumous media coverage Powell was receiving.

Others attacked the ex-president for ‘dancing’ on Powell’s ‘grave’ and lashing out because he’s insecure.

‘So how does this statement from the former President of the United States make you feel as an American?’ Democratic Rep. Ted Lieu of California said on Twitter. 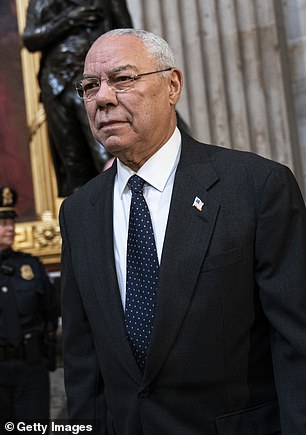 Political scientist Larry Sabato not only condemned Trump but also members of the ex-president’s party who ‘keep silent’ on his Powell comments.

‘No decent human being will defend Trump’s malevolent, spiteful, narcissistic statement on Gen. Powell. But those Republicans who keep silent today will speak volumes about how Trump has debased them and their once-great party. Candidates with no courage never deserve our votes,’ Sabato wrote on Twitter.

‘This is the reason Donald Trump’s numbers with Veterans cratered in 2020. He lost so much ground with Veterans it cost him the election. His trashing of Colin Powell is the normal way he treats anyone that makes him insecure which includes most of the military,’ Soltz wrote on Twitter.

Pulitzer Prize-winning writer David Cay Johnston said: ‘Trump mocks Colin Powell because, of course, Donald is jealous of the news coverage of the general and Secretary of State’s death. Such a classy guy, that Donald.’

He also shared a political cartoon of Trump pointing to a hole in the ground. The text bubble reads, ‘Look! A foxhole that once belonged to Colin Powell! Disgusting! Dirty, damp, full of rats.’ 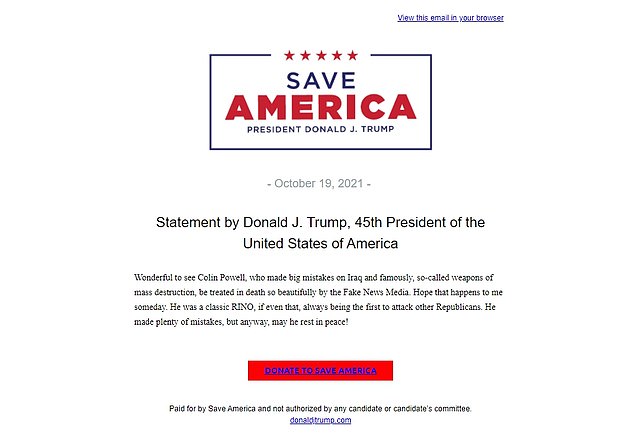 Former aide to Mike Pence Olivia Troye lauded Powell as a ‘mentor’ and said Trump’s statement proves he doesn’t care about the military.

‘Trump’s disgusting & vile statement about Powell is another blatant reminder that he doesn’t care nor have the capacity to understand and respect those who serve our great country,’ Troye wrote on Twitter.

‘We’ll assume each & every @HouseGOP & @SenateGOP member is ok with this, unless they show enough spine to disavow it,’ he said on his social media.

Anti-Trump Republican group The Lincoln Project also chimed in to call Trump’s words ‘Disgusting. But Not Surprising,’ on Twitter.

One of Trump’s fellow Republicans, former Ohio state lawmaker Jim Trakas, did rise to criticize him but noted he was a ‘Trump supporter.’ 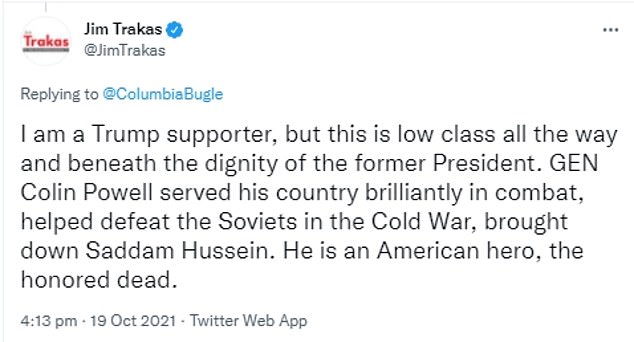 ‘I am a Trump supporter, but this is low class all the way and beneath the dignity of the former President. GEN Colin Powell served his country brilliantly in combat, helped defeat the Soviets in the Cold War, brought down Saddam Hussein. He is an American hero, the honored dead,’ Trakas wrote on Twitter.

Left-leaning group Occupy Democrats tore Trump apart with aggressive language and capitalization that have become hallmarks of Trump’s own commentary.

‘Trump dances on the grave of our first Black Secretary of State Colin Powell, saying he made “big mistakes” and is being “treated in death so beautifully by the Fake News Media” even though he was a “RINO.” RT IF YOU THINK TRUMP IS AN UTTER DISGRACE!’ the group wrote on Twitter.

Powell’s family announced his death in a Facebook post where they also mentioned the trailblazing government official was fully vaccinated against coronavirus.

However he’d previously been diagnosed with multiple myeloma, a type of blood cancer that impacts the body’s ability to fight infections. Powell also suffered from Parkinson’s and underwent surgery for prostate cancer in 2003. 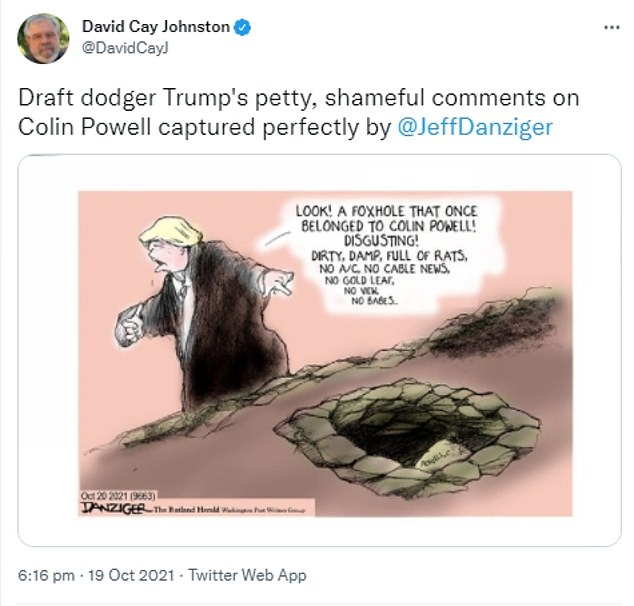 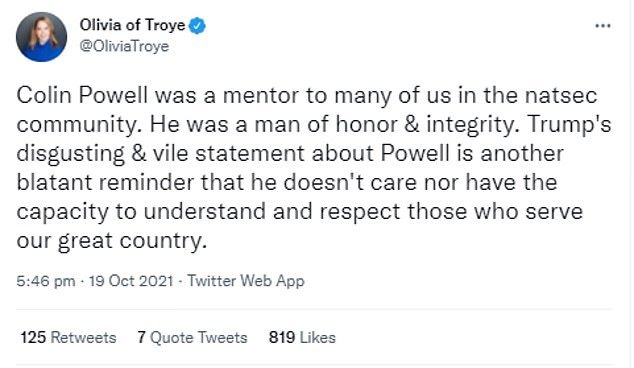 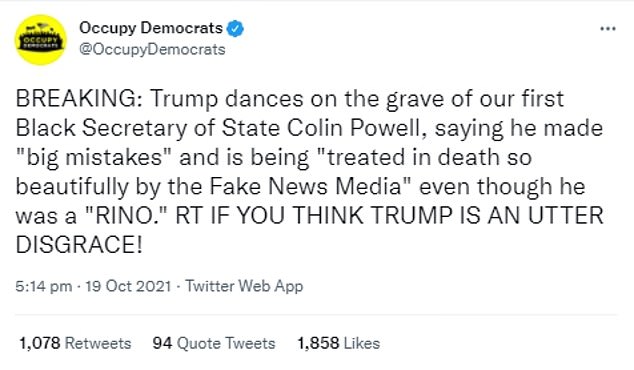 On Monday, veteran journalist Bob Woodward revealed in the Washington Post that Powell criticized Trump over the January 6 Capitol riot in his final interview before his passing.

Powell made history as the first black national security adviser to a president, first black Chairman of the Joint Chiefs of Staff and first black Secretary of State, under the Reagan, Bush Sr. and Bush Jr. administrations respectively.

Since his death, current and former government officials and every other living president across the political spectrum has paid respects to Powell and thanked him for his years of government service.

Praise for Powell even came from Pence, who tweeted yesterday: ‘Colin Powell was a true American Patriot who served our Nation with distinction in uniform, as a four-star general, National Security Advisor, Chairman of the Joint Chiefs and as 65th Secretary of State. Karen and I are praying for his wife, Alma, and the entire Powell family.’

Woodward revealed on Monday that Powell accused Trump of trying to overthrow the government three months before he died.

‘It was awful. He was going in there to overturn the government,’ Woodward claimed Powell said of Trump. 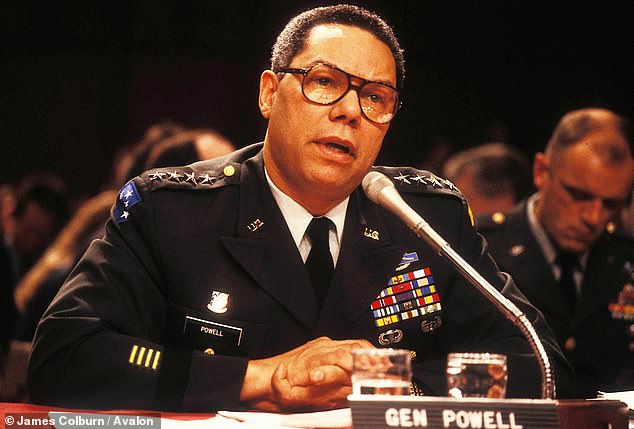 Powell, seen here in 1990, was the first black Secretary of State and to this day is the only black man to ever serve as chairman of the Joint Chiefs of Staff

‘Trump refuses to acknowledge that he wasn’t reelected. He has people who go along with him on that,’ Powell reportedly said.

In the interview, which he gave three months before his death, Powell told Americans: ‘Don’t feel sorry for me, I’m 84 years old.’

‘I haven’t lost a day of my life fighting these two diseases. I’m in good shape.’

He said he had to ‘get all kind of exams’ at the Walter Reed National Military Medical Center in Washington, D.C., noting: ‘I’m a former chairman, so they don’t want to lose me, so they make me come there all the time.’

Powell and Trump had been diametrically opposed to one another since Powell spoke out against him in 2016.

The formerly Republican official has endorsed Democrats for president since Barack Obama in 2016. 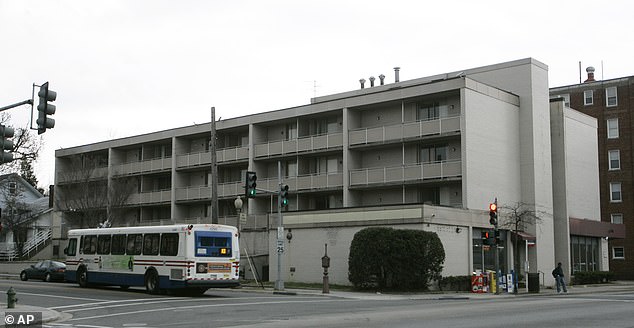 He said he was suffering from blood cancer and Parkinson’s Disease and had to ‘get all kind of exams’ at the Walter Reed National Military Medical Center in Washington, D.C. (pictured)

Leaked personal emails from around the time showed Powell calling Donald Trump a ‘national disgrace’ and an ‘international pariah.’

‘Trump is nuts. Everybody wants me to speak out, but I will pick the time and place for maximum effect like I did in 2008 and 2012. Right now, Trump is his worst own enemy,’ Powell had written.

He told CNN in June 2020 that he’d vote for Biden in November because he ‘certainly cannot in any way support President Trump this year.’

Trump’s reaction to Powell was swift and angry.

‘Colin Powell, a real stiff who was very responsible for getting us into the disastrous Middle East Wars, just announced he will be voting for another stiff, Sleepy Joe Biden. Didn’t Powell say that Iraq had ‘weapons of mass destruction?’ They didn’t, but off we went to WAR!’ he wrote on Twitter at the time.

Within an hour the then-president followed it up with another tweet calling Powell ‘highly overrated.’

Powell told CNN early in 2021 after four years of Trump that he could ‘no longer call myself a fellow Republican.’

Around the same time he went after the former Republican president more directly, urging him to stand aside in a January 2021 interview with NBC’s Today.

‘I wish he would do what Nixon did and just step down. Somebody ought to go up to him and it’s over. Plane’s waiting for you. You’re out,’ Powell had said. 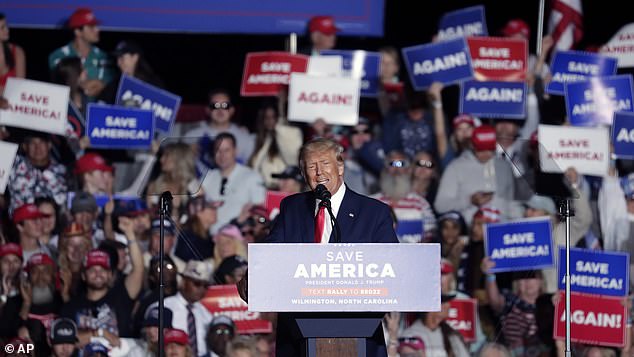 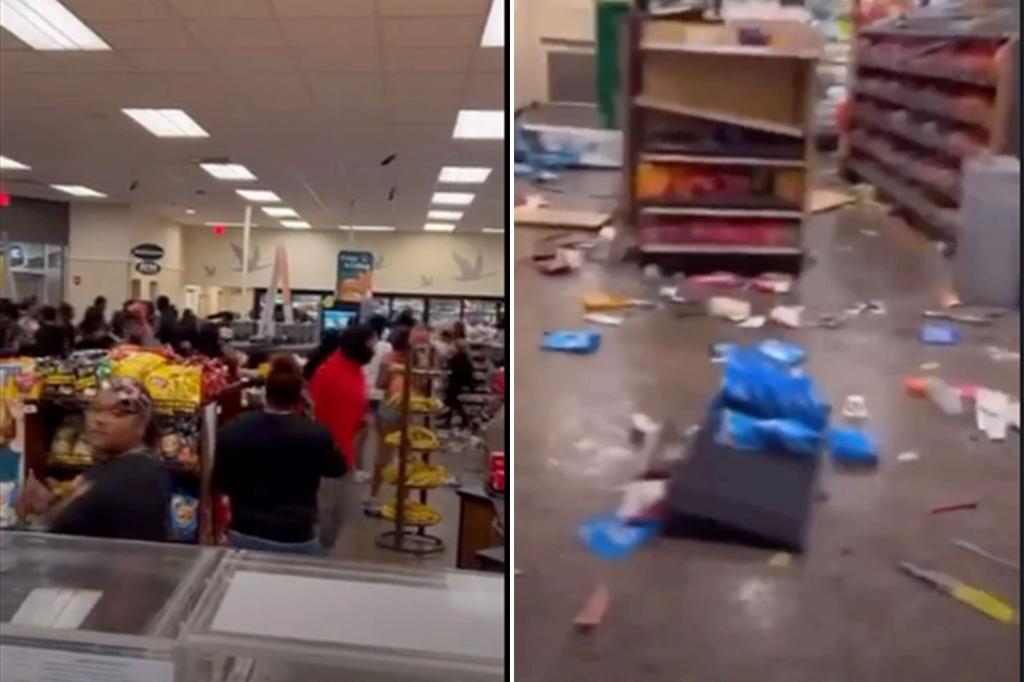